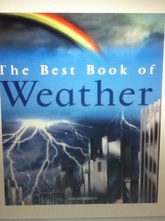 The Best Book of Weather By Simon Adams. Illus. by Mike Saunders & Roger Stewart. (2001). 31p. Kingfisher Publishing, (9780753453681). Juvenile Nonfiction.
A large amount of information about all types of weather. Three levels of text ranging from general to much more specific. 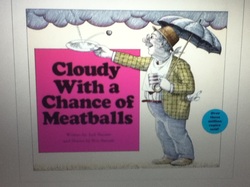 Cloudy with a Chance of Meatballs By Judi Barrett. Illus. by Ron Barrett. (1988). 32p. Atheneum Publishing, (978-0689306471). Ages 4 and up.
A humorous story that follows the lives of the people of Chewandswallow, an imaginary town where the weather brings rains of soup and juice, snows of mashed potatoes, or wind storms of hamburgers.  The townspeople fear for their lives when they experience floods of food and have to come up with a solution.

Hurricane & Tornado By Jack Challoner. (2000). 72p. Dorling Kindersley Publishing, (978-0756606909). Ages 8 and up.
A guide to nature's most dangerous and destructive forces. Full-color photographs, models and illustrations offer a unique "eyewitness" view of catastrophic weather conditions.
It Looked like Spilt Milk By Charles Green Shaw. (1947). 32p. Harper& Row Publishing, (978-0064433129). Gr. Preschool and up.
This is a classic concept book that uses simple white shapes against blue background to engage students in creative thinking and prediction skills as they try to figure out what they are seeing. The final page reveals that "It was just a cloud in the sky."
Like a Windy Day By Frank Asch and Devin Asch. (2002). 32p. Harcourt Publishing, (978-0152064037). Grd. K and up.
Humorous story of a girl who imagines herself doing all of the things that the wind can do through the countryside, into town, and along the beach and riverside until she settles at the end "like a gentle breeze." 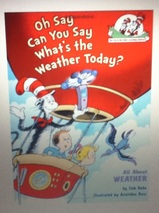 Oh Say Can You Say What's the Weather Today?: All about Weather By Tish Rabe. Illus. by Aristides Ruiz. (2004). 48p. Random House Publishing, (978-0-375-82276-6). Gr. Preschool and up.
The Cat and company travel by hot air balloon up and into various weather phenomena including rain, snow, thunder, tornadoes, and hurricanes. Along the way they learn about thermometers, anemometers, wind vanes, cloud
formations, humidity, fog, smog, weather folklore, and how to stay safe in lightning.

Storm Is Coming! By Heather Tekavec. Ilus. By Margaret Spengler. (2004). 32p. Pufin Publishers, (978-0142400708). Ages 5 and up.
This is a humorous book about farm animals being afraid of a person named "Storm" after the farmer says “Storm is coming!” and how the real storm scares the person "Storm" away. The story follows the animals as they wait together, huddled safely from “Storm.” 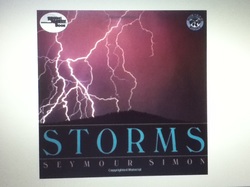 Storms By Seymour Simon. (1989). 32p. Harper Collins Publishing, (978-0688117085). Grd. 2 and up.
A nonfiction, photographic explanation of the natural occurrence of storms. Beautiful photographs accompanied by factual data and clear explanations. 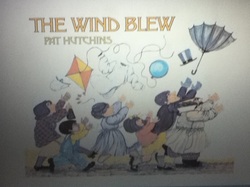 The Wind Blew By Pat Hutchins. (1993). 32p. Aladdin Publishing, (978-0689717444). Gr. Preschool and up.
A humorous story about the wind blowing so hard that it takes everything in sight with it; but the wind seems to have a mind of its own. This story has a rhyming verse and colorful illustrations. 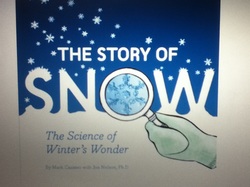 The Story of Snow: The Science of Winter’s Wonder By Marc Cassino. (2009). 36p. Chronicle Publishing, (978-0811868662). Grd. 2-5.
This book features close-up photographs of real snow crystals. Offers answers to frequently asked questions about snowflakes while exploring the science of snow.